HSRP or Hot Standby Router Protocol is a protocol defined by Cisco and now described in rfc2281. HSRP is a Cisco-proprietary protocol.

The purpose of HSRP is to ensure network connectivity in case of Router or access circuit failure, by having one standby Router waiting to take over from the failing active Router.

Configuration of R1, R2 and R3

HSRP Routers sends hello packets at regular intervals to each other.

Enhanced tracking possible on some platforms. See links below. 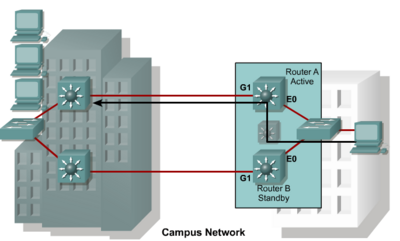 Here are some clippings from it. Cisco seems to have added this
opcode as part of the feature "HSRP Support for ICMP Redirects":